Just like you get regular maintenance, like oil changes, performed on your car – it’s probably a good idea to have your household appliances looked at every now and then also. Especially if they’re not brand new. I’ve been in this home for eight years and that means that three of my large appliances are eight years old, too. I’m not in any hurry to replace these appliances. In fact, I’d like them to last as long as possible.

Now I know that appliances cost far less than a car, but they are still a very large investment. Have you priced large appliances lately. Holy sticker shock!!! With that in mind, don’t you think it’s a good idea to do all we can to take care of the home appliances that we own?

Sears offers a one-year service plan. What’s really awesome about this Bundled Maintenance Package is that it doesn’t matter where you bought your appliances. Or what brand they are!

It doesn’t matter WHERE you purchased your appliances. Sears Home Appliances and Services maintenance plan provides an in-home technician when you need one, because Sears is the House Experts for Homeowners.

No matter where you bought it, Sears can perform maintenance services for all major brands, makes, and models.

The morning of the scheduled appointment, the in-home technician called to let me know that he would be arriving on time. Nice!

When the technician arrived, he quickly got to work starting in the kitchen. He started with our new dishwasher. He ran it through the cycles and made sure we installed it correctly. (Yes, the dishwasher installation was a DIY project ; ) Next, he moved on to the stove/oven.  Again no issues – it’s relatively new.

Then it was time for the refrigerator. Ah yes. The refrigerator. The refrigerator has a bit of a history. It had been acting up this past summer. The freezer was frosting up and the refrigerator section was not cool enough. So I “googled” the problems and decided that we needed to replace the gasket. So we did. By ourselves. Yes, we were self-taught refrigerator gasket replacers ; )  After all, we watched several You Tube videos. How hard could it be? Yeah. It was hard. But we did it. But it didn’t really resolve the aforementioned issues.

So we called in an expert. This so-called expert was a waste of my time and money. So we called in another repairman. He was a little better. He said we did a good job installing the new gasket. Thanks. But that wasn’t the problem. We needed new cams on the hinges. What???? My son took over from here. He called a local appliance store, had them order the cams and then installed the cams in the hinges. Problems solved.

The Sears technician got to hear this whole story and he did a very thorough inspection of said refrigerator. It passed inspection ; ) He then showed me how to remove the bottom pieces to get to the dust bunnies. There were so record-breaking sized dust bunnies under there! 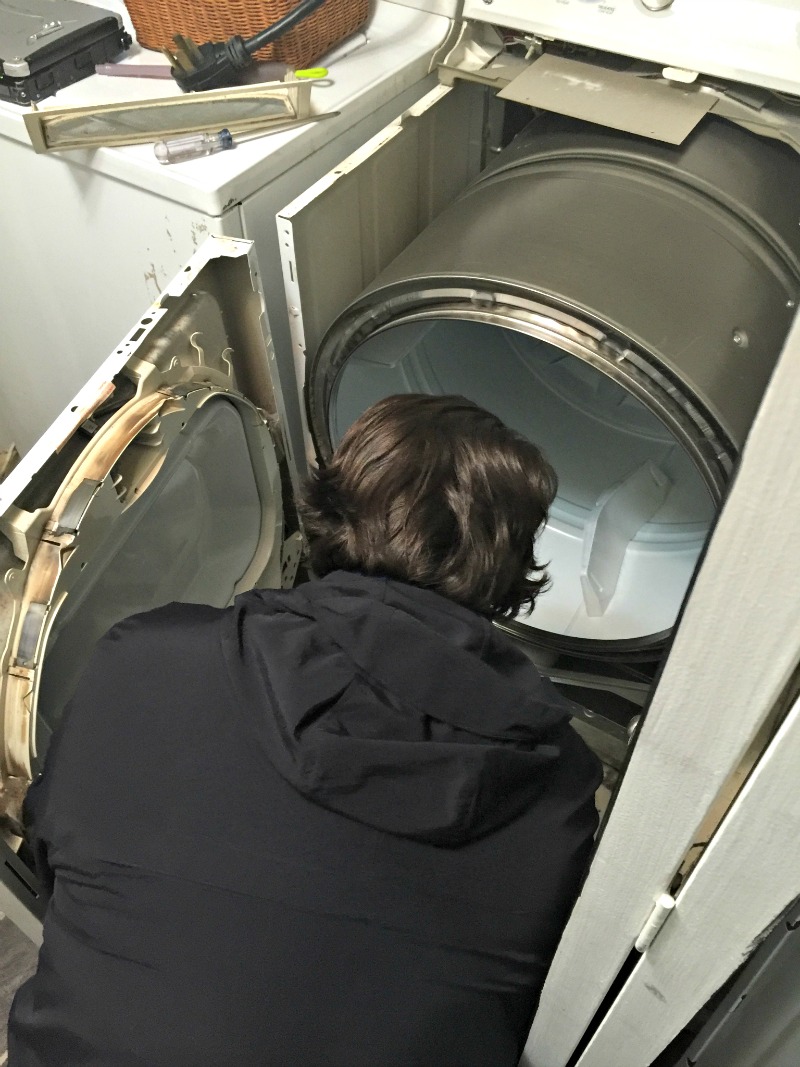 The technician saved the oldest appliances (the washer and dryer) for last. I couldn’t get over how thorough he was! You can see in the photo above that he literally took apart the dryer! I should have taken a picture of all the dirt, lint, and dust he pulled out of there but I was in shock! Plus it was a little embarrassing ; )

Sears has been a leader in the home services industry for more than 50 years and installs 4.5 million appliances and 4 million parts a year so I figure they know what they’re doing when it comes to appliances!

So the verdict? I couldn’t recommend this service more!

This is a sponsored post written by me on behalf of Sears Home Appliances and Services.