We waited until Friday to finish our Pedal to Pittsburgh, when my daughter, son-in-law, grandson and sister would be in town to celebrate our finish with us.  That and we needed a lift! Although we thought we had 10 miles to go to get to the 150-mile marker at Point State Park, it was actually less than that and we got there long before my family did. But we waited until they got there to cross over the last mile marker!

We got a late check out from the hotel and hit the paved trail at around two in the afternoon. As luck would have it, it was a dreary, drizzly day (but not as bad as the first day!), so rain gear and fleece pants were donned once again. These last little leg of this journey is vastly different from the rest of it. This section is urban and goes around hotels, shopping centers, businesses, and a water park. The only thing that is the same is the river. There’s always a river! You can read about the second day here, and the third day here.

We reached the Hot Metal Bridge that has an upper deck that is just for pedestrian and bicycle traffic. Nice! The views from that bridge of downtown Pittsburgh are amazing. 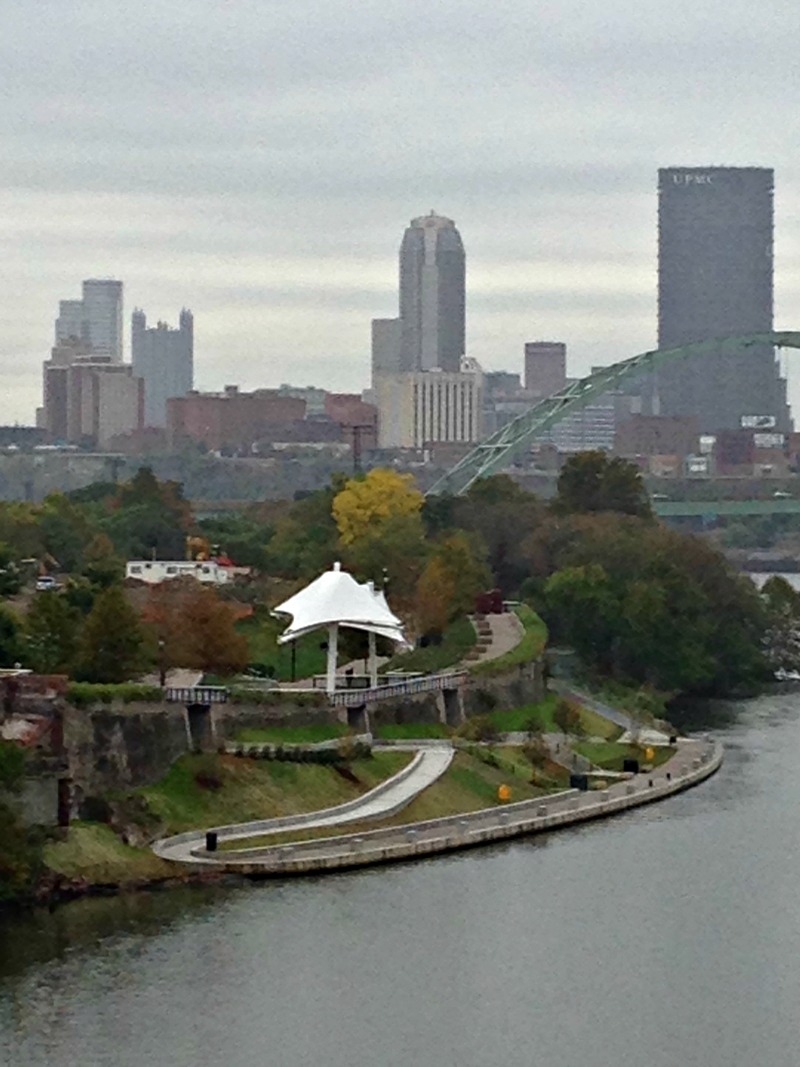 After crossing the bridge, we pedaled a few miles on the paved trail that was under the city’s “concrete jungle”. It was a pretty weird feeling and all of my senses picked up on the fact that this was not a gravel trail in the woods. The traffic noise and the exhaust smell were a jolt to someone that just rode 140+ miles in the most remote areas of the state, where the only thing you smell is the damp forest and the only noises are the trains, rivers and your own breathing…..but I loved it! And I’ll say this: I felt much safer on my bicycle in the city than I thought I would! Kudos to Pittsburgh for becoming such a bicycle-friendly city! 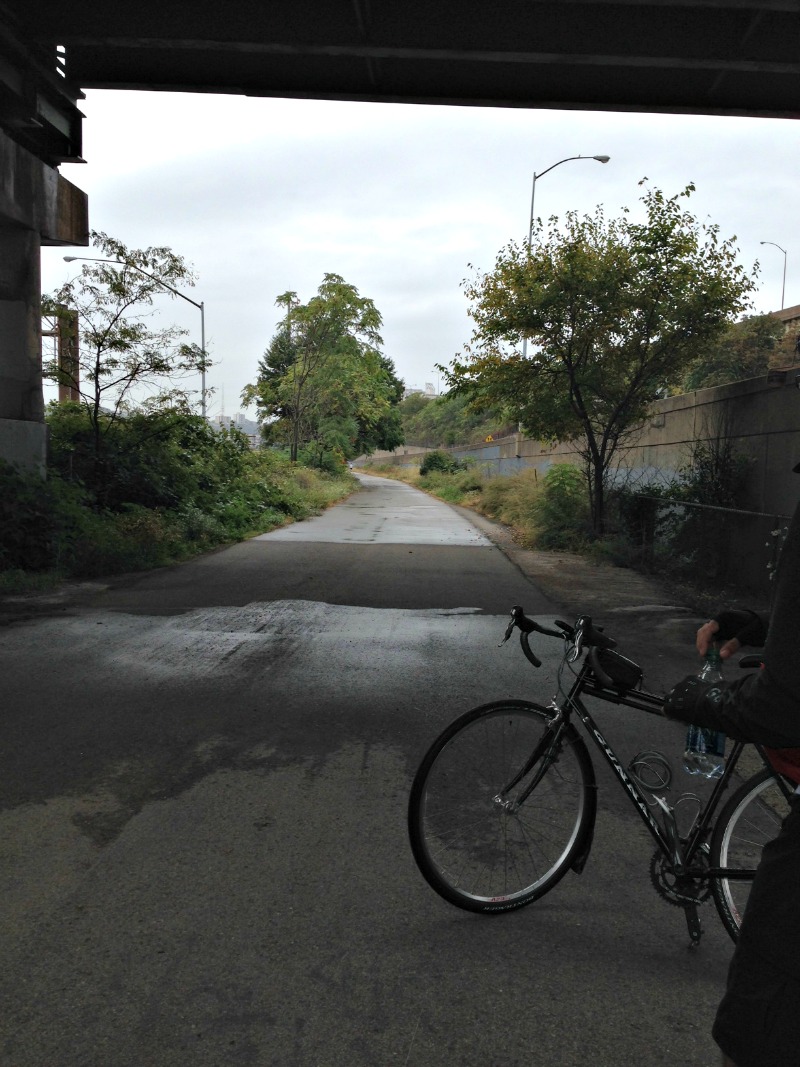 As we pedaled into Point State Park we noticed small crowds heading towards the fountain, which is at the very tip of the point where the three rivers join and where the medallion is marking the last mile marker of the Great Allegheny Passage. I knew they weren’t all coming to see us finish our journey ; ), although that would have been nice! Turns out they were all going to see the giant yellow rubber ducky in the Ohio River. 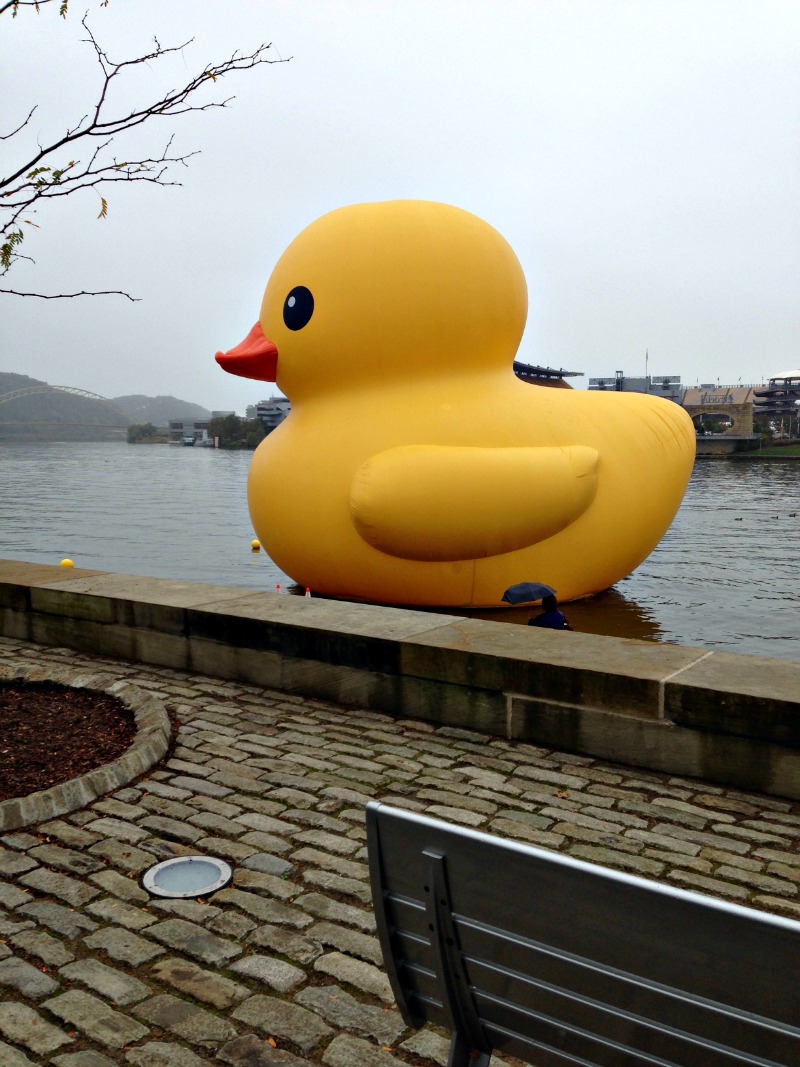 Don’t ask me! I have no idea! But my grandson thought it was pretty cool!
My family finally found parking and made it to the park. Dan and I found a ramp to pedal our bikes down to the lowest level at the very tip of The Point so that we could officially finish The Ride of My Life! 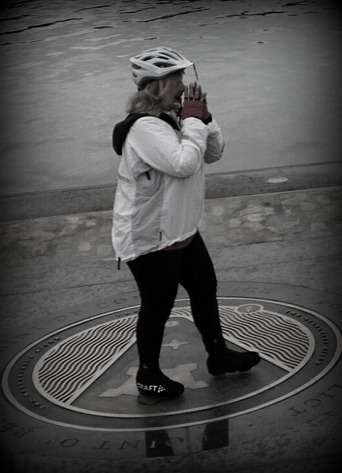 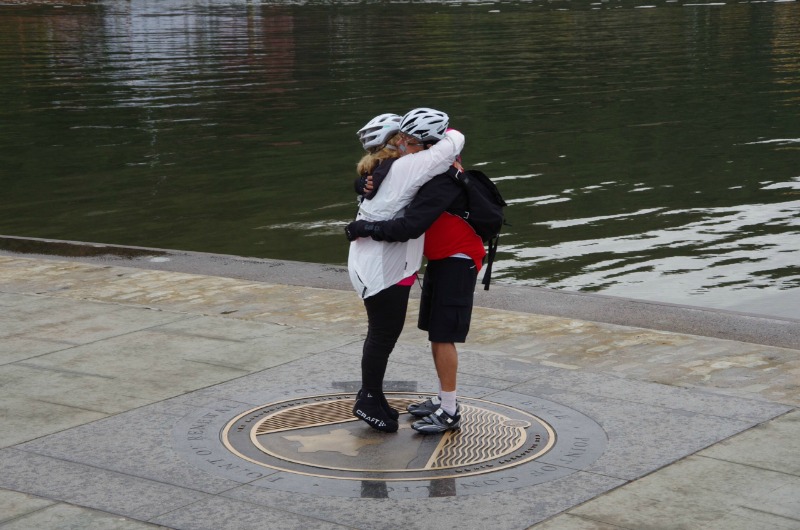 We did it. Yessirree, we sure did.

And it was the Ride of My Life.

It was probably the hardest thing I have ever done in my life. And I loved every single minute of it!